It took an agricultural industrialist by the name of James Deering to build a European-inspired winter home right on Biscayne Bay in Miami. The property was called the Vizcaya Museum and Gardens in between years of 1914 and 1916. But at present, it is now considered a National Historic Landmark.

It includes an amazing collection of statues and other antique objects. The particular Frog Fountain displays some playful lizards and frogs onto something of a sarcophagus. The fountain is made of marble and installed at one end of the main garden at the south side section of the house.

This fountain was said to have suffered from deterioration too and along with a couple of abuse in the course of its long history. One of the lizards has been stolen and the rest of the sarcophagus had been greatly damaged by some inappropriate remodelling and repairs. The sarcophagus was found to have been made up of extensive deposits of lime which had gathered up on the surfaces of it. It has trapped soil and has masked the underlying genuine stone. Since it was only supported at the end side, the water’s weight had made the sarcophagus crack and break.

It was the Conservation Solutions, Inc. who was assigned to repair and conserve the Frog Fountain by year 2005. The experts who worked on it re-created the lizard that was stolen by molding the original design and casted a new element with the use of some zinc alloy. With regards to the sarcophagus, repairs were made out of stone Dutchman. To resist cracking, an invisible looking steel brace was made. It was entirely cleaned from soiling and the lime deposits along with the evaluation of the quality of the water. 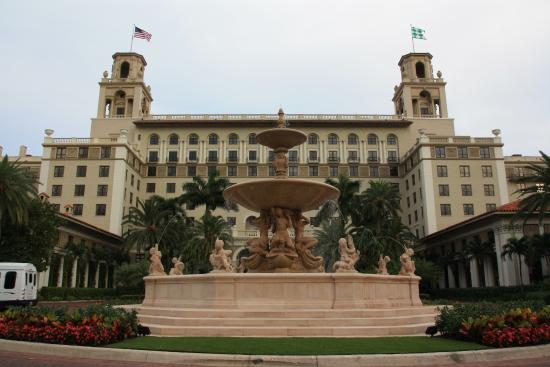 Fountains in Florida: The Breakers Fountain

This fountain is located at the center of Breakers Hotel right in Palm Beach in Florida. It was made along with the construction of the hotel in 1926. Its design was based on the original Renaissance model situated at the entrance of the Pitti Palace which leads to the Boboli Gardens in Italy. It was created out of the designs of Leo Lentelli who was a sculptor and made extensive contributions to the Panama-Pacific Exhibition in San Francisco by year 1915. It was included there the design of a certain fountain which looked similar like the Breaker’s Fountain.

The fountain made out of cast stone includes sculptures of four nymphs which support two tiers of basins, a few spindles and a finial within a pool that is octagonal. There are also eight putti holding up some alligators. The pool is raised a bit higher within a plaza that is sited at the center of the primary entrance drive.

It was in the early days of 2007 when Conservation Solutions were assigned to assess the primary fountain right at the entrance of the Breaker’s Hotel. They then developed some treatment for its design and water, prepping it up for the overall restoration, when it comes to its structure and mechanical system.