The Archibald Fountain in Sydney

Widely regarded as the finest public fountain in Australia, The Archibald Fountain or properly called the J. F. Archibald Memorial Fountain has a rich history behind it. It was named after the owner and editor of The Bulletin magazine, J. F. Archibald. Due to Archibald’s love of French culture, he specifically instructed that only a French artist can design the masterpiece he envisioned. Artist Francois-Leon Sicard designed the fountain that was unveiled on March 14, 1932. It was Archibald’s mission to commemorate the association of Australia and France in World War 1 and for Sydney to aspire to Parisian civic design and ornamentation upon deciding to have a fountain situated near the Sydney Tower.

The artist, Sicard, was a classically educated artist who studied classical Greek and Roman art and literature. His proposal of the fountain provided exquisite details and explanation for every facet of the fountain. He explains in his proposal of the sculptural groups, Sicard illustrates the conception of Apollo as a representation of Beauty and Light, his right arm as a sign of protection over all nature, the sunrays as symbol of Life, the horses that represented Apollo’s chariot with water coming out of its nostrils and falling into the first basin, down to the second and to the largest basin. The large basin which is divided into three groups representing Goddess Diana, the young god of fields and pastures, and sacrifice for the public good, completes the magnificence of the fountain’s form. 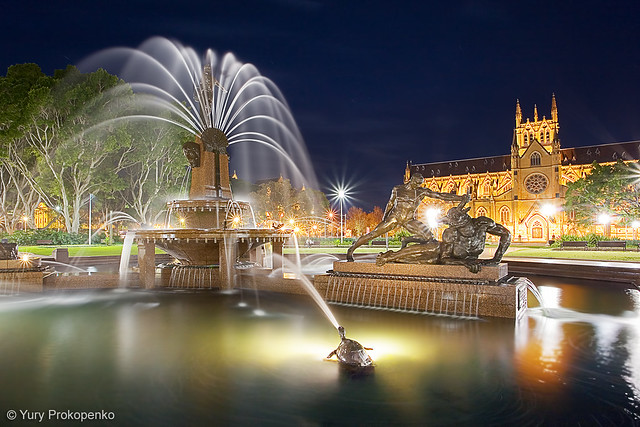 At night, the fountain is electrically illuminated and floodlighted for spectators to enjoy and take in as a reminder of something that is wonderfully mysterious and awe-inspiring.